For bravery while with the party that attacked and took the quarries, he rallied the men against Russian counter attacks, remaining at his post even though he was wounded. 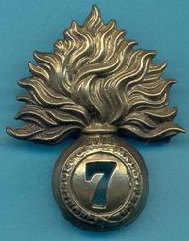