As sergeant in the Scots Fusilier Guards he rallied his men around the colours, the Queens colours being waved by Captain Lindsay, thus helping to steady the line until he was wounded at the Battle of Alma.

Thank you to Michael, Kate & Ruth Pagan for photos of Hawhead memorial and Glasgow VC memorial and James McKechnie grave 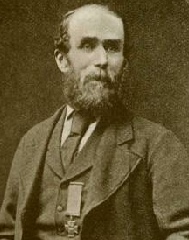