P  Memorial cross on the Ridgeway Path, near Lockinge, Oxfordshire

Serving as captain in the Scots Fusilier Guards he rallied his men under furious fire at the battle of Alma, then at the battle of Inkerman he led the charge against a large number of the enemy. 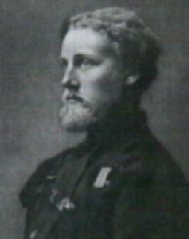