During his time in the Sudan after the war, his medals were stolen. The medal box was recovered, the only medal left in the box was the VC, the thief thinking it worthless 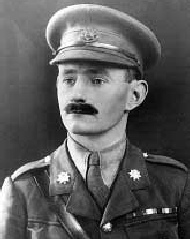