He was the brother of (1223) Victor Buller Turner VC

Thank you to Mr Mark Beach, Headmaster at Parkside School, for photo of the School War Memorial 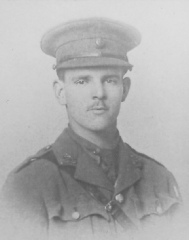