Now   The Duke of Lancaster’s Regiment

P  Named on Victoria Cross Plaque outside & Freedom of the Borough plaque inside The Museum of the Manchesters, Ashton Town Hall, Market Place, Ashton-under-Lyne

Plaque at his home  'Foxearth Cottage', Holyport, near Maidenhead, Berkshire

A headstone was erected in 1994, not on exact location of grave

His original VC was lost, a replacement was given 9 November 1929 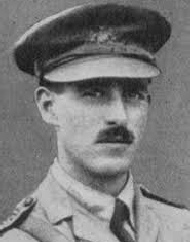