VC Presented   Registered post to his mother, Charlotte on the 26 September 1916 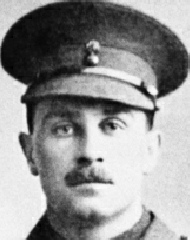