He was originally buried where he fell by the walls of Old Fort, Hill 141, Sedd-el-Bahr, Gallipoli, Turkey 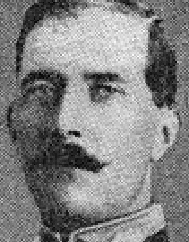