He was treated for his wounds that he received in his VC action at the Indian Hospital, Brighton Pavilion 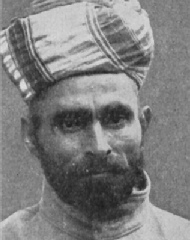