Place Of Death   At his home, Woodsgate, Pembury, Kent, England

He was made Knight Legion d’Honneur, an honour founded by Napoleon

Being in command of a seven gun battery, an enemy shell blew up the magazine putting six out of seven guns out of action. He kept the one remaining gun in action all day despite heavy fire. 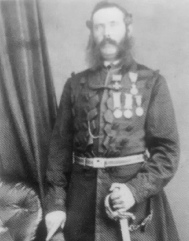