Abraham Acton’s mother and father moved to the Isle of Man, after the war. Hence the name on the war memorial in Douglas 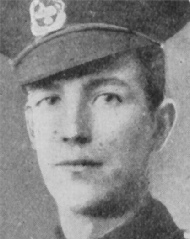