He was originally buried were he fell, but later reburied in Morogoro Cemetery, Tanzania 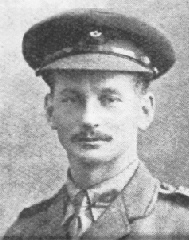