Statue in gardens of the Army Museum, Rawalpindi, Pakistan

He was the first Indian to be awarded the Victoria Cross 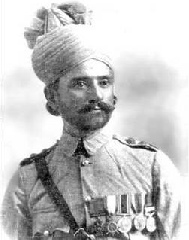