A turfstone headstone was placed on his grave in august 2003. The stone was donated by Abercorn Memorials 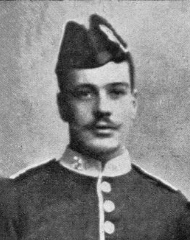