George Wyatt was in the police force before and after the war, retiring in 1934 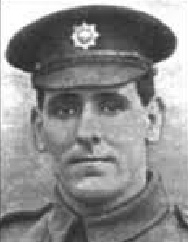