He was originally buried in Vlamertinghe Churchyard, Belgium 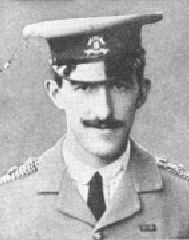