Place Of Death   Hyde Park, London, England (where he was gatekeeper)

He was a gamekeeper in Essex, before joining the army 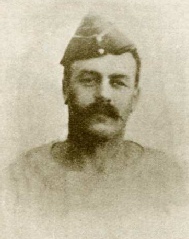