Now   The Duke Of Lancaster Regiment

Place Of Death   At the home of his in-laws, Arlington Court, Arlington, near Barnstaple, Devon, England

Soon after his VC action, he was wounded in the arm and had it amputated

Two Russian infantry battalions were attacking, so leading by example he leapt over a wall and shouted to his regiment to follow. As they did, they threw back the enemy attack. 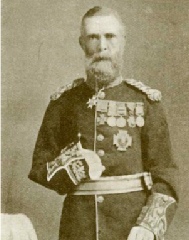