It is normally thought that a Brigadier General would be way back in a safe place, but he died leading his men in November 1914 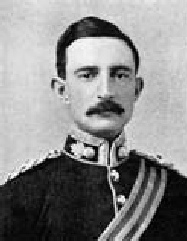