At the Battle of Inkerman he defended his guns against far superior numbers until incapacitated by twelve bayonet wounds. He survived. 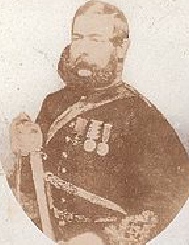