Together with surgeon Mouat helped to save the life of a lieutenant colonel he was badly injured after the charge of the light brigade. 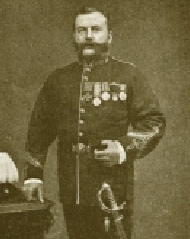