In 1857 he married a Miss Jane Emily Blackadar

While in charge of a siege battery before Sebastopol, he was ordered to spike his gun and retreat owing to a heavy Russian sortie. He ignored the order and turned the gun around to pour flanking fire on the enemy thus helping to break up the attack. 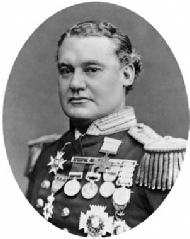