Samuel Parkes was captured after his VC action, on release was court marshaled for desertion, although all charges were dropped 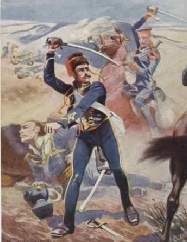 Having had his horse killed from under him, he saw two Cossacks attacking a defenceless trumpet major, putting himself between friend and foe fought them off. Making their escape they met six more Russians, but with brilliant sword play he forced their retreat.