Having his horse shot from under him, he was making his way back to British lines, when he stopped and helped John Berryman and John Farrell with the wounded officer. 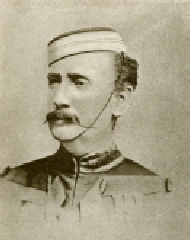