He was awarded the VC for various acts, but most notably for bringing back a wounded officer whilst under fire after the charge of the light brigade. 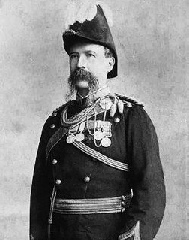