Was acting as a sharp shooter in his VC actions

When forced to retire under enemy fire, he brought back a wounded comrade, he repeated this act two months later saving the life of a corporal. In the June of 1855 he volunteered for the advanced guard in attacks around Sebastopol. 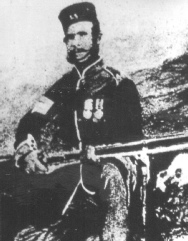