Place Of Death   At his home, Moate, near Athlone, Co. Westmeath, Ireland

He showed conspicuous gallantry at the relief of Lucknow, between 12th July and 25th September 1857 during all twelve actions fought by his regiment, until wounds put him out of action 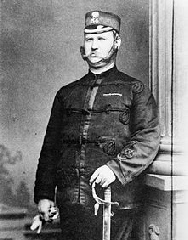