During the siege of Delhi, for numerous acts of bravery, including on 9th July 1857 saving the life of his captain by killing two Sepoys before further assistance arrived. He was elected by the Privates of the regiment 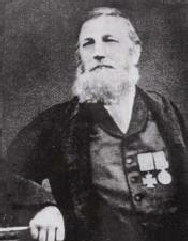