The school he went to was renamed the George Mitchell School in his honour. Another old pupil of the school was 703 John Cornwell 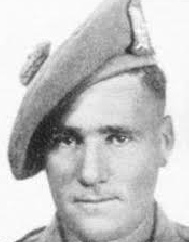