Worked on his Fathers farm before the war, and returned to the soil after it was over 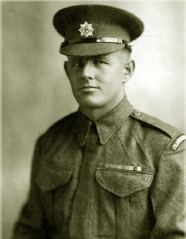