CO of special agent school at Hertford from August 1940 to July 1941, amongst his students were the infamous traitors Kim Philby and Guy Burgess 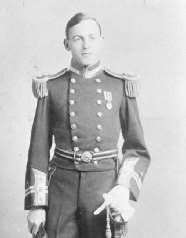