He gained the Victoria Cross in World War 1, re-enlisted in World War 2, where he was killed and buried in Haifa, Israel 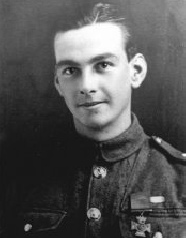