Place Of Death   Near Epinoy, France

A second VC holder lived in the same road about the same time in Bournemouth, Dorset, his name was 574 Cecil Noble 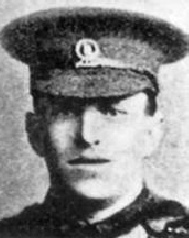