Born in Co Antrim, he emigrated to New Zealand in 1914 only to come back to Europe again via Gallipoli 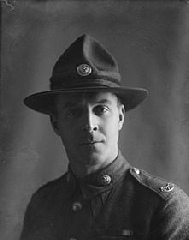