Called up for service for the Second World War, he served in North Africa, acting Colonel in the Royal Army Ordnance Corps, he was killed in Egypt 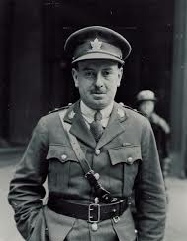