In September 1855, whilst on duty in the trenches, picked up a live shell and without hesitation threw it over the parapet where it immediately exploded. His swift action saved many lives 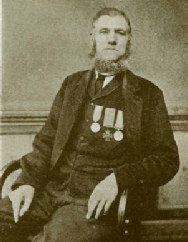