On 29th September 1855, he held a position against strong Russian forces. Rallying the wavering Turkish allies, they drove the Russians out of the position. Then, at great risk to himself, helped to save the wounded Russians from the vengeful Turks 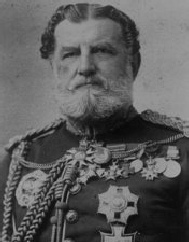