War stopped his studies to be a Doctor. After the war he resumed his studies, becoming a Doctor and in 1958 was a member of the Council of the Royal Collage of Surgeons 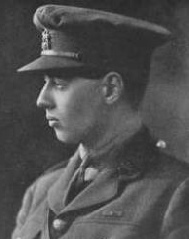