Place Of Death   Near Havrincourt, France

He was in the same battalion as his father and they fought together at the battles of La Bassee, Festubert and Loos 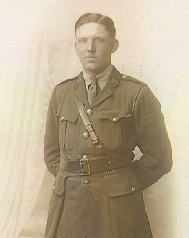