When the war started his employers Vickers of Barrow in Furness, wouldn't let him join up. They relented by 1917 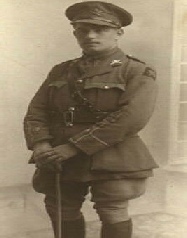