All 5 Brothers joined up and even head of household Harry Sewell Snr, at 55 joined up. 3 of the Sewell brothers did not survive the war including Cecil 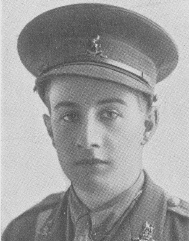