He was killed during a Air Display, in Wiltshire, England, and was taken home to South Africa for burial. 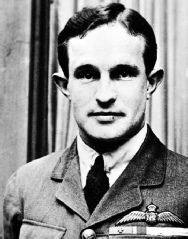