He was killed in action during the Second World War, as the Japanese entered Singapore he was last seen alive walking towards them with grenades in his hands, shouting 'No surrender for me' 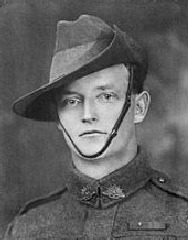