VC Presented   Sent by registered post to next of kin

Died before he received the Victoria Cross.

Was at the forefront of an attack on the Redan and was amongst the heavy fighting. He rescued an officer who was surrounded by Russians, shooting one and bayoneting another 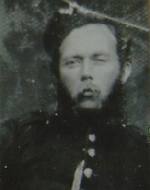