He died four weeks after his action while being a prisoner of war. He was buried by the Germans. 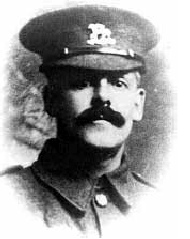