Before the war he worked for a while in the Tea Trade in Assam, India 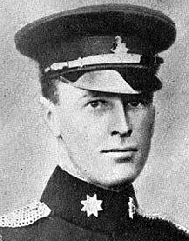