VC Presented   30 August 1917 by the Governor-General of New Zealand, Earl of Liverpool at Oamaru, New Zealand to his father, Robert

He sold his farm, and went to off to war, never to return again 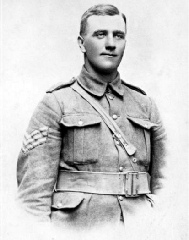