VC Presented   3 April 1917 by the Governor-General of Canada the 9th Duke of Devonshire at Winnipeg, Canada to his father, Henry Trevelyan 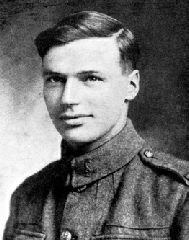