He won his Victoria Cross serving in the Seaforth Highlanders, but died as a Major in the Bedfordshire Regiment 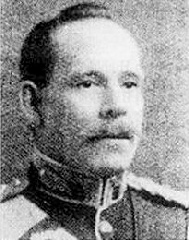