Sale of Flawn's VC announced August 1904, however, Flawn proved that he had never parted with it and Hancocks didn't think it had been engraved or manufactured by them 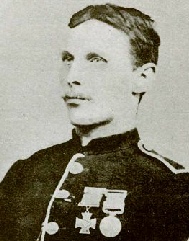